India has written a letter to the District Administration Office, Darchula stating that Nepalis have illegally entered the areas including Gunji, Kalapani and Limpiyadhura.

Deputy Magistrate of Dharchula district in India Anil Kumar Shukla has urged the Darchula administration to stop entry of Nepalis to the Nepali territory that India has encroached.

The Indian letter points that some groups are trying to clandestinely cross the border and illegally enter Gunji, Kalapani and Limpiyadhura to draw media attention and to bother administrations of both the countries. "You are, therefore, requested to take trouble to immediately inform if you receive any information of such kinds," the letter states.

Deputy Chief District Officer (CDO) of Darchula Tek Singh Kunwar told Setopati that India may have written the letter in suspicion as activities in the border areas have increased since the Armed Police Force and Nepal Army reached Tinker and Chhangru areas there. "India may have been suspicious after Indian media made news reports about that. Nobody seems to have reached Kalapani area though," Kunwar said.

The border dispute between Nepal and India has escalated after India issued a new political map in November 2019 including Nepali territory of Kalapani, Lipu Lek and Limpiyadhura.

The Nepal Government on May 18 passed the new map including Kalapani, Lipu Lekh and Limpiyadhura after inauguration of the Indian road via Lipu Lekh on May 8. The House then unanimously passed a Constitution amendment bill in June to implement the new map. 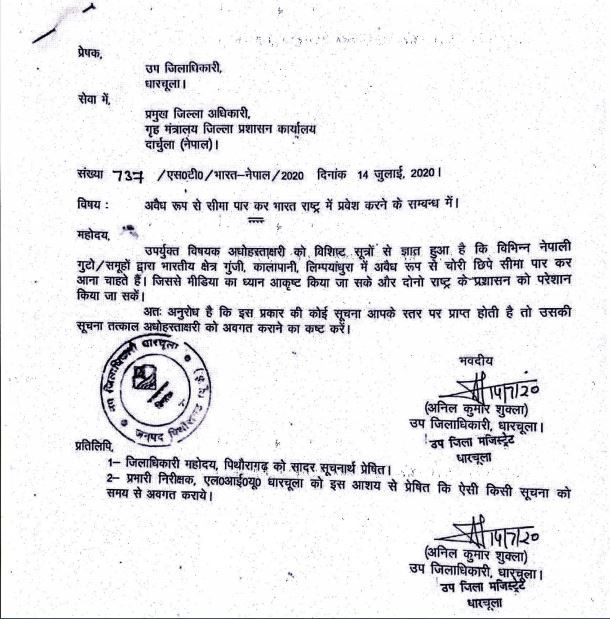