Govt to present Constitution amendment bill to House on Sunday

The government will present the Constitution amendment bill to the House of Representatives (HoR) on Sunday.

Some CPN leaders said the issue was removed from the House schedule on Wednesday pointing that the main opposition Nepali Congress (NC) demanded time to the chagrin of NC leaders who pointed that the party's office-bearers had already decided to support the amendment bill and would convene central committee meeting to formalize the decision.

The government has put the issue on the proposed schedule hours after the NC central committee meeting earlier on Saturday decided to instruct the parliamentary party to vote in support of the amendment bill to change the coat of arms in accordance to the new map including Limpiyadhura, Kalapani and Lipu Lekh  issue. 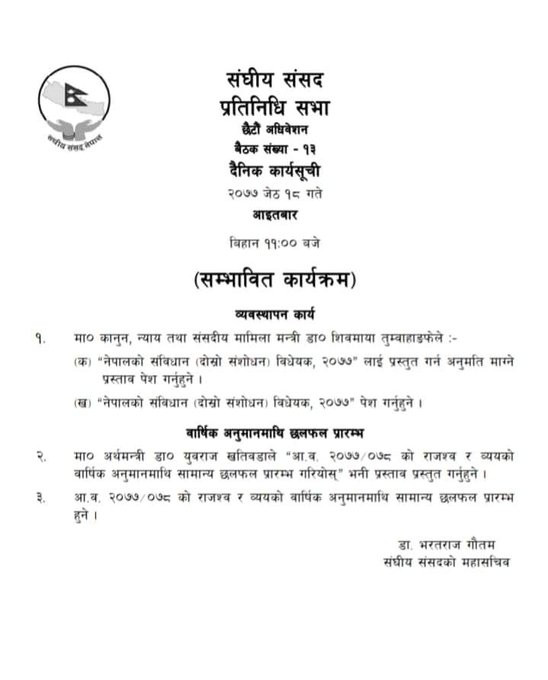 The government has registered the Constitution amendment bill to amend the schedule of the Constitution, wherein the map in the coat of arms does not include the territory including Limpiyadhura, to implement the new map.

Madhes-based parties, Rastriya Janata Party Nepal (RJP) and Socialist Party Nepal, have been saying the government should also include their demands for Constitution amendment while amending it for implementation of the new map.

The government on May 20 published the new map including Kalapani, Lipu Lekh and Limpiyadhura. The territorial area of Nepal has increased by 335 square kilometers with inclusion of the territory up to Limpyadhura.

The government on May 18 passed the new map including Kalapani, Lipu Lekh and Limpiyadhura.

Inauguration of the Indian road via Lipu Lekh on May 8 has been widely criticized by the ruling and opposition parties alike.

The Foreign Ministry has already expressed regret over the unilateral construction and urged India to refrain from carrying out any activity inside the territory of Nepal. It then summoned the Indian Ambassador to Nepal Vinay Mohan Kwatra and handed a diplomatic note conveying Nepal's position on the issue.

Nepal has consistently maintained that as per the Sugauli Treaty (1816), all the territories east of Kali (Mahakali) River, including Limpiyadhura, Kalapani and Lipu Lekh, belong to Nepal.

Nepal had also expressed its disagreement in 2015 through separate diplomatic notes addressed to the governments of both India and China when the two sides agreed to include Lipu Lekh Pass as a bilateral trade route without Nepal’s consent in the Joint Statement issued on 15 May 2015 during the official visit of the Prime Minister of India to China.