CPN Vice-chairman Bam Dev Gautam has given six-point advice to the warring chairmen to stop the internal dispute in the party.

He has given the suggestion that largely favors Oli when the standing committee meeting scheduled to resume at 11 Tuesday morning has been postponed indefinitely. He has proposed that Pushpa Kamal Dahal should remain chairman with all the executive rights until the general convention.

He has proposed  that the party should not unnecessarily intervene in the work of PM but advised that the secretariat should be consulted before decision on issues of international importance. He has also proposed Cabinet reshuffle.

"Reshuffle of the Cabinet, and political and constitutional appointments should be done on recommendation and consultation of the party secretariat. The secretariat should be consulted before presenting the government's policies and programs and the budget to the House," he has suggested.

He has also advised that party meetings should not be held in the PM's residence. "Party meetings from now onward should be held at the party office."

The latest proposal appears another volte-face by Gautam who has been switching camps in the past few years. Oli had proposed to make Gautam the PM to break the alliance against him in April end when he was similarly in a tight spot.

But he later reneged on the promise and Gautam had returned back to the anti-Oli alliance. What prompted the latest change of heart in Gautam has yet to be known. 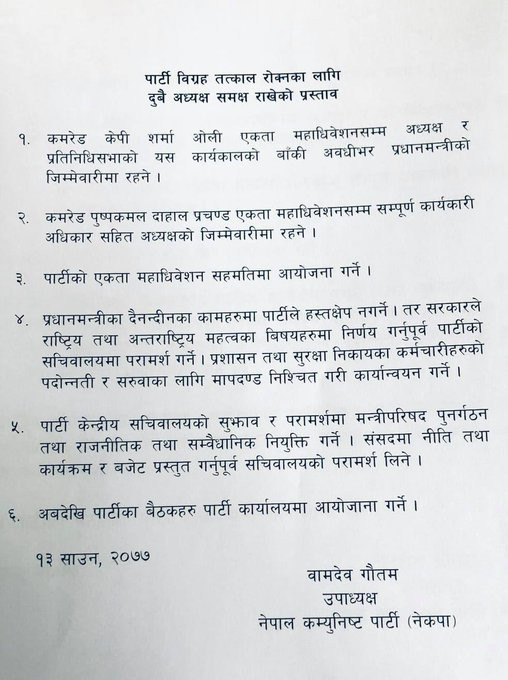