Evening walk with donkey and sheep 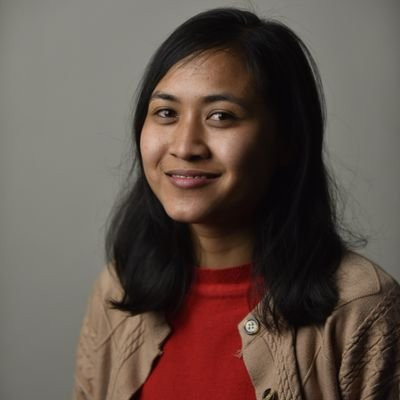 These animals have names similar to humans:  Pooja, Shobha, Jasmine, Tika and Kanchhi.

Pooja and Jasmine are donkeys, Shobha, a sheep and Tika and Kanchhi dogs. They are accompanied by two ducks and cats.

Robin Marston, 83, lives with his wife Wendy and these animals at a one-ropani house in Sanepa. He has been living in Nepal for 43 years and has made these animals part of his family. Marston means a town near the marsh and he has built at his home a small town for these animals in a swamp.

"The animals found us rather than we finding them," he replies with a tinge of humor when asked how he found these animals.

His heart is much more generous than his sense of humor.

Around 13 years ago, Marston brought a sick donkey in his car from a brick factory in Chobhar.

Within few months, the donkey started getting better. She also had a foal in her womb. The foal was born in Marston 's house. But a month later, the mother died.

Marston had no idea about how to take care of a lone foal.

The foal Pooja was small and lonely. She was not happy either. Meanwhile, his friends advised, "Donkey and sheep bond well. So, get a sheep as company for the donkey."

He did as advised. Then Shobha (sheep) found in Dhobighat became part of his house. 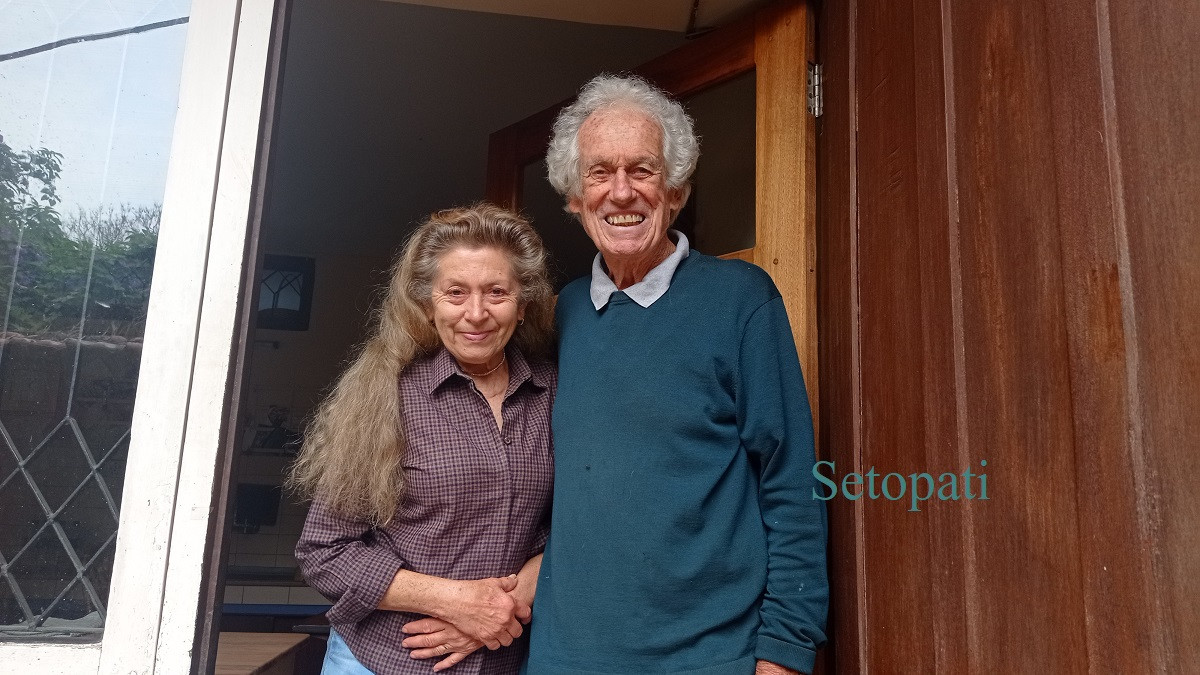 Pooja and Shobha duly became friends. Played, ate and grew up together. The sheep also helped the donkey stay calm.

Shobha is about 14. Marston has read on the internet and in books that sheep lives for only about 12-13 years. He is happily surprised to see Shobha alive for 14.

"This sheep grew up with a donkey. But now, she doesn't care so much about him. She just spends her time wandering around the house," he says.

Marston jokingly explains more about her, "Shobha sees donkeys, dogs and ducks around her. Sometimes, she might get confused whether she is a dog or a sheep."

After growing up with Shobha for about a year, Pooja found Jasmine. Marston 's friend Princess Ketaki Shah had found a similar sick donkey in the brick factory in Chobhar and took that home.

Coincidentally, she also had a foal in her womb. Gradually, she became better and gave birth to it but died within a few months. Marston brought that foal too in his car and added to his family. 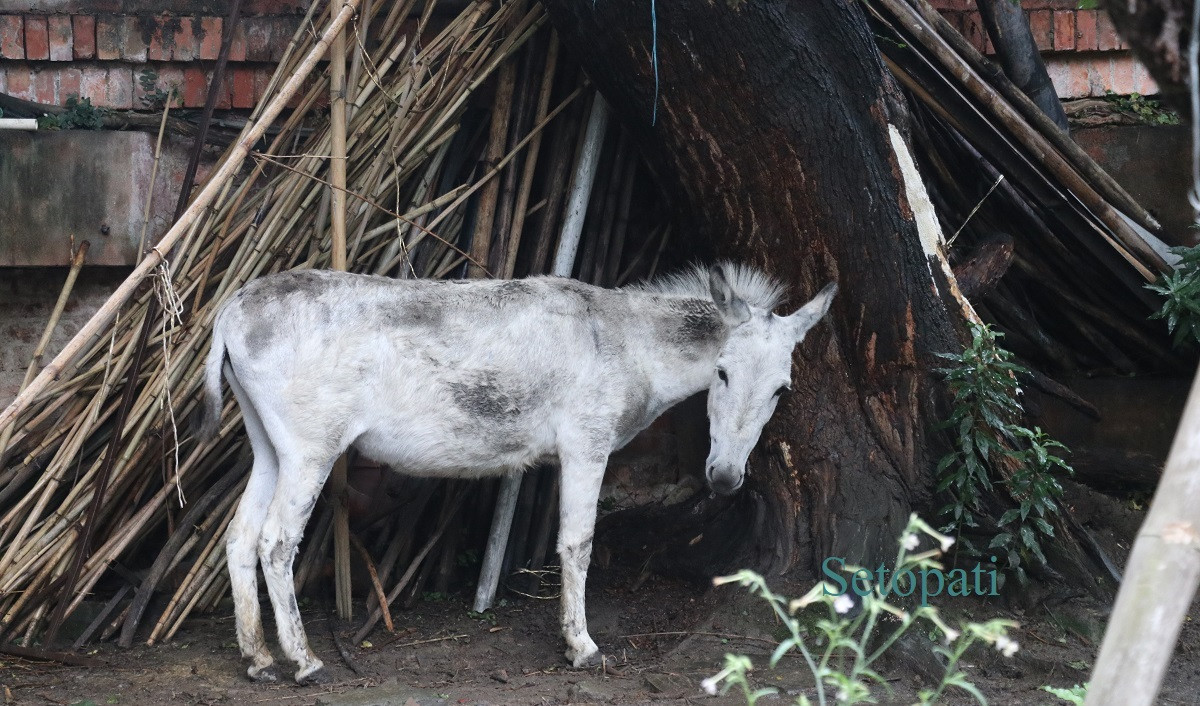 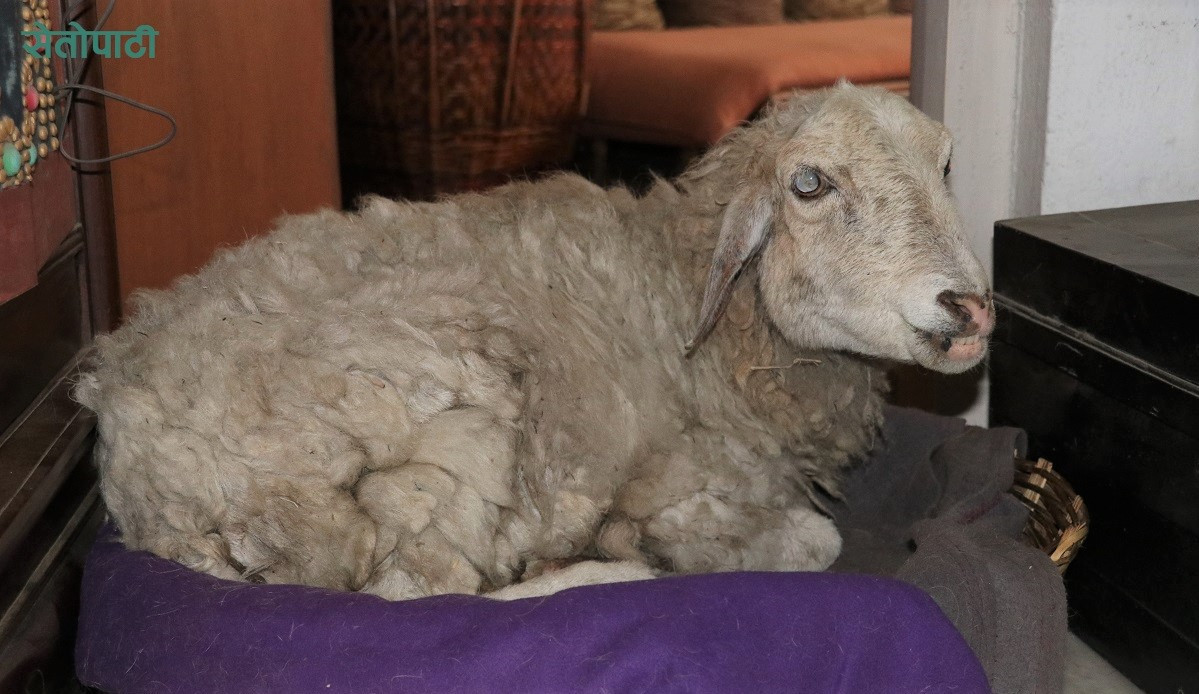 Marston does not like the way donkeys are treated, being forced to work in brick factory with heavy loads on their back. Many find them dirty, but he says they are clean.

Unlike other animals, he has been raising dogs for a long time. During his stay in Kathmandu, he has raised around 30 street dogs. Now, he only has Tika and Kanchhi left. One of them got the name Tika because of the small mark on her forehead. The other is the youngest member of the family.

We also asked him about the ducks roaming around the yard, "Do they also have names?"

"Mr Duck and Mrs Duck," Robin laughs at the question.

Ducks and cats are not named. He found a duck at Summit Hotel near his home. The duck had escaped before being killed as offering in religious ritual. As the staff of the hotel saw it swimming in the pond, he handed it to Marston's wife Wendy with the belief that the duck would be cared enough at their place.

Since the ducks prefer to live in pair, the Marston family bought another one.

"The lady duck that I brought earlier died just a month ago. So, we bought another one that same evening," Wendy said. "For the new one, our house was totally a different place. She was confused initially, but another duck taught her everything." 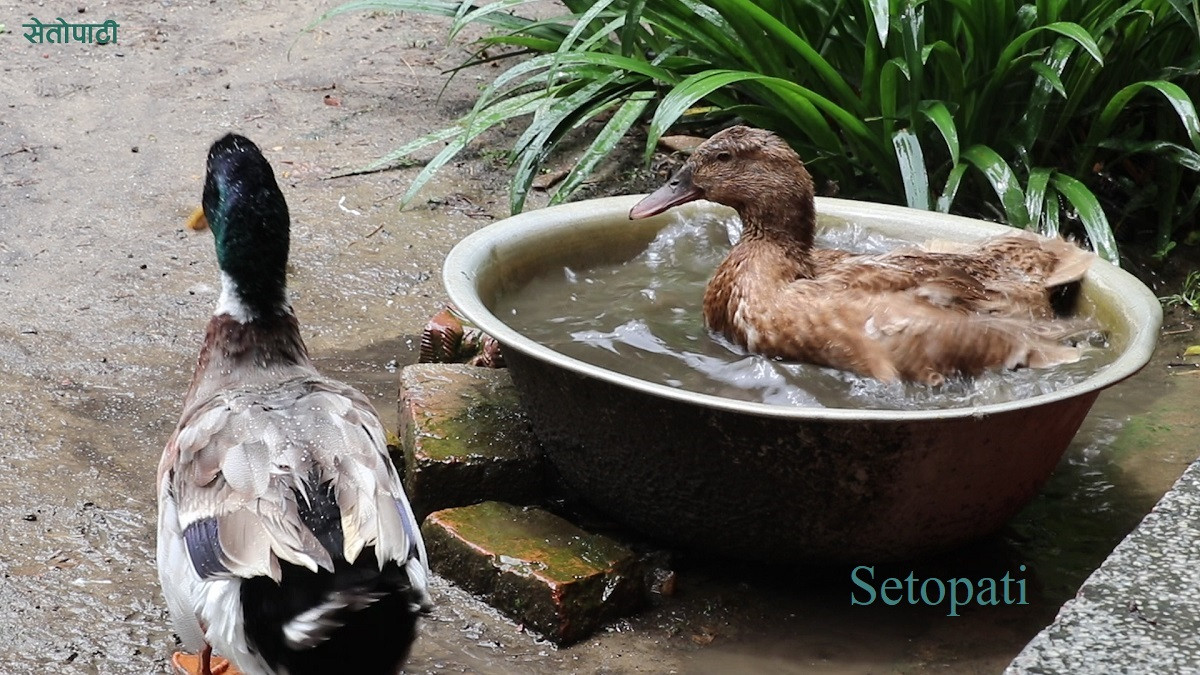 They also dug a small pond on one corner of the garden. Cats spend most of their time on the roof of their house. So, one rarely sees them.

In the previous house, the Marstons had raised owl, mongoose and even monkeys.

"We had a kind of reputation for taking good care of animals. That's why people used to come to us with animals, " says Wendy. "Once a man left 10-12 injured owls  in our house to take care of. Mongoose used to roll over my arm and sleep there. We also had a monkey which was quite notorious."

If you go for a morning or evening walk around Sanepa area, you can even see their animals. Donkeys, dogs and sheep come out for a walk with them.

"A man comes in the morning to take them out. I'd go myself in the evening," says Marston.

Dogs and sheep are fine, but when people see donkeys, they look at them with wide eyes. Nearby shopkeepers who know about them, keep cauliflowers and corn leaves for them.

"They eat a lot. And sometime, they even come making sounds near our kitchen," Wendy says.

Marston believes that the animals should get as good a life as humans.

"The world has been ruined by humans, not animals," he points. "People have ruined the world with plastic, environmental degradation and pollution." 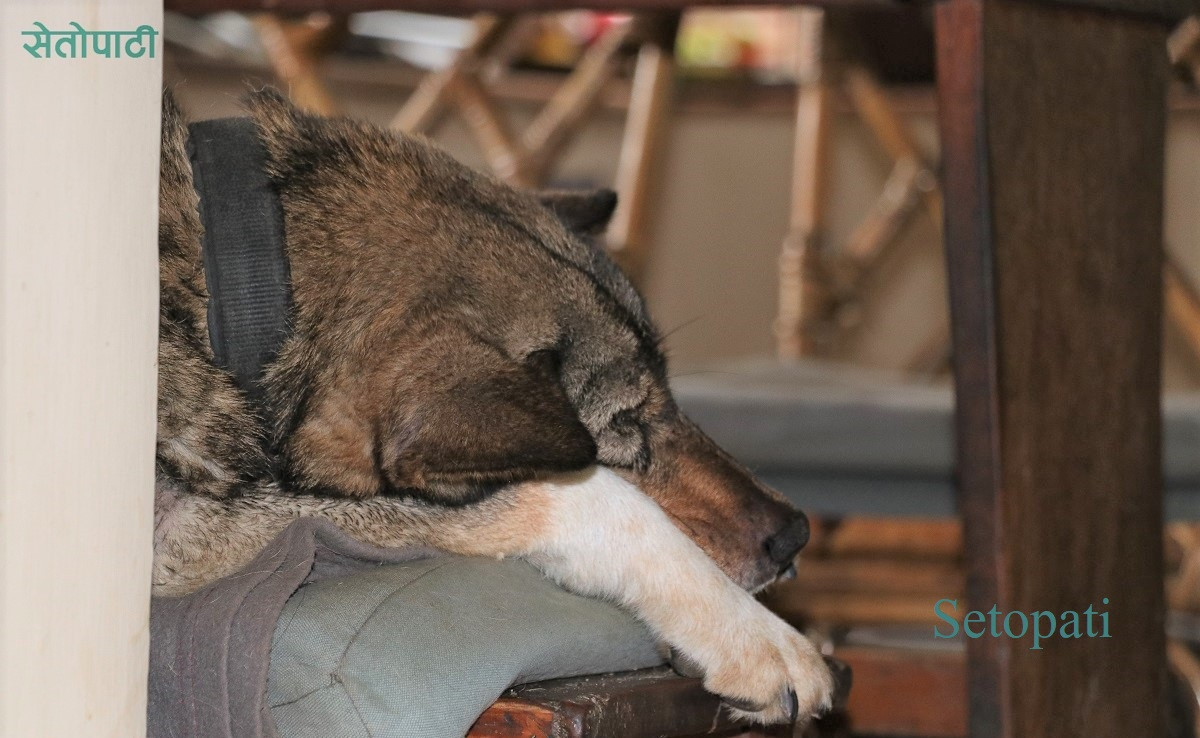 The Marstons have been living in Nepal for 43 years. Marston first came to Nepal even earlier in 1962. He was in the British Army at the time.

Conscription existed in the United Kingdom (UK) for boys over 17 when he grew up. He calls his recruitment a coincidence.

Marston graduated from the Royal Military Academy Sandhurst. He was based in Singapore, Brunei, Malaysia, Hong Kong and other several countries while serving the army.

In Singapore, he also met his wife Wendy. Wendy's father was the South East Asia head of the Navy, Army and Air Force Institutes (NAAFI), a British services support organization.

He came to Nepal in 1962 as officer in charge of the Gold Escort. After Nepal, he returned back to the UK.

Having left the army, he returned back to Nepal in 1978 with a different vision. He got a job as a managing director in Mountain Travel Nepal, a sister company of  Tiger Tops Jungle Lodge. He and Wendy entered Nepal driving five weeks in a Land Rover and trailer.

Nepal was just taking baby steps in tourism then. Roads were not built and the number of vehicles were quite low. That added challenge as well as adventure in the tourism sector.

"I trekked nearly everywhere. The number of people was low. There were more fields than houses. There are a lot of people now. During the Maoist conflict, many people entered cities from the villages."

Marston has not limited himself to trekking and mountaineering during his stay in Nepal. After working with Mountain Travel Nepal for 12 years, he joined Summit Hotel where he worked again as a managing director for nearly a decade and half. He also engaged himself in social works. He opened 10 schools near Seti Khola in Pokhara. 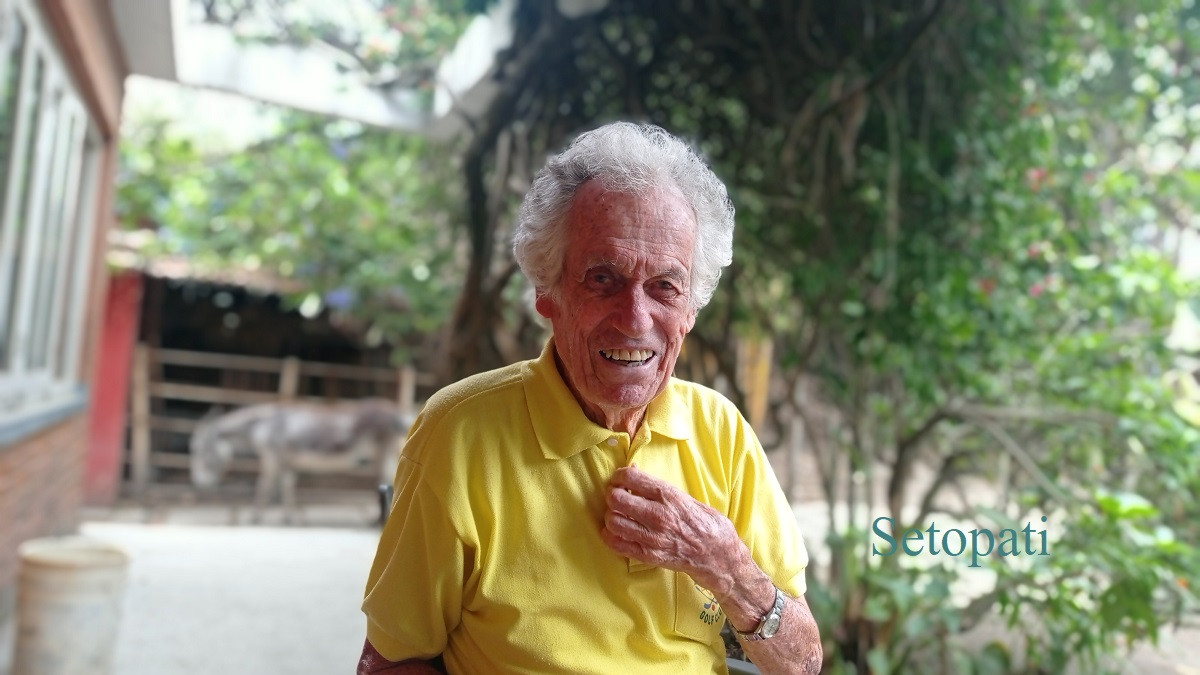 He is now living a retired life. He gets up around five in the morning. Then goes out for a walk. If there were no pandemic restrictions, he would go out to golf at around six. He does some exercises and social work in the afternoon and after reading and watching TV in the evening, goes to bed by nine to 10.

"It's not as interesting as it used to be," he says. "Now I spend most of my time with these animals. Life is good but it used to be more lively before."

Marston has been married to Wendy for 55 years. She is an artist. Some of her paintings hang on the walls of their house.

For the past 22 years, she has been serving burn victims through an NGO  named 'Burn Violence Survivor Nepal'. She goes out for morning walk carrying some rice, doughnuts and biscuits for street dogs.

The Marstons have a 42-year-old daughter. Born and raised in Nepal for 16 years, she is currently in the UK.

While she was in Nepal, she served in the Far West region with the International Committee of the Red Cross during the Maoist conflict. As she was proficient in both Nepali and English, she also worked as an interpreter. Marston and Wendy also understand and speak Nepali well.

The Marstons have spent more than half of their lives in Nepal. That's why they do not hesitate to say Nepal is dearer than the country they were born in.

Instead, they openly say, "Nepal is very special. The people here, the work, social services, all of that are special to us. Since we have spent a lot of time here, it would be hard to get back and adjust with so many changes."

No matter how much they feel Nepal to be their own, this country has not been exactly fair.

Marston is currently staying in Nepal on a 'dependent visa' as Wendy is currently studying at an arts college. But the visa is set to expire soon. They will have to get a 'tourist visa' later on and will be allowed to stay here only for around five months a year.

That's why they seriously ponder at times whether they should stay in Nepal or return back to the UK.

The Marstons are not happy with Nepal's visa system. They tried for a 'retirement visa' but failed.

‘The Gurkhas go to the UK and stay there. But even though we have lived in Nepal for so many years and done so many works, we do not have a visa, " Marston rues. "We feel very bad."

This year has been tough for the Marstons.

They have been living in a house in Sanepa for about 27 years. They had rented the house but the landlord eventually sold that house to another person and now they have to leave it by the end of December.

They will even have to leave some animals and not just the memories attached to this house. Even though they are used to living with animals, not all of them can be accommodated in a small space of the apartment which they would probably shift to.

"It is our responsibility to take the animals to a better place. That's why we visited a donkey sanctuary near Bungmati last month. The donkeys will probably go there. The sheep will also go with donkeys as there are some goats too. It might be okay for her with goats," says Marston. "Dogs and ducks can be kept in the apartment."

It's going to be a big change for the animals too.

"Maybe the animals will forget us with time. But we are going to miss them very much," he sighs.