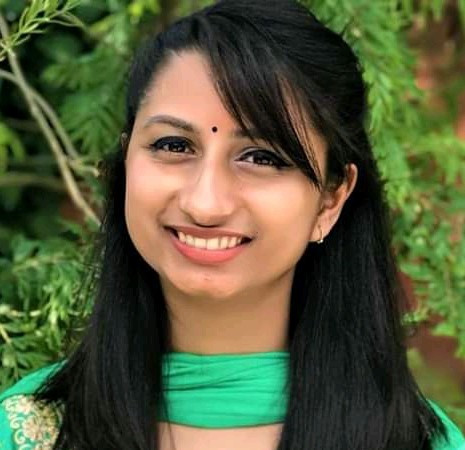 I was 13 when I first got noticeably bad vaginal burn on the fifth day of my period. When I shared this with my mom, she advised me to drink more water. Hydration did not work for me and this pain continued at the end of every period. I was in period poverty and had no expert to advise me what is happening and what should be done.

Growing up, I experienced that intolerable burning in my vaginal area in almost all of my post periodic days which would last from a day to four-five days. It is not that I experienced it round the clock. I used to have mild pain which I would notice only if I focused on that area but there was another kind of pain. The second kind of pain would not come scheduled, and arrive sometimes while I was about to sleep, sometimes during the assembly line or during group meetings. If I was alone in a room, I used to murmur with closed eyes, lie down, put a cold water bottle above and try to find some relief but it's different when you are with someone. I used to feel that it has come but I could not show my feelings and had to pretend to be normal. Something like electric current used to pass from that area up to the heart covering sides of the stomach and little up toward the head.

Honestly, sometimes I used to feel major nerves in my torso during those episode of currents. I used to feel all the heat coming up and tears would fill my eyes instantly. My fingers would hold each other together in a fist. Sometimes they would automatically try to reach and push back that part as a reflex action but secondary thoughts ‘to be socially civilized’, used to stop my hands from reaching there. That anxiety would last for 30-40 seconds at peak, three-four times a day and would pass away. This little time used to be emotionally disturbing. I used to feel relief for some time after the burning attack and would forget about that for the next 25-26 days until the next period arrived.

Two years back, while I was preparing to give sessions on menstrual hygiene to a group of school students, I first became familiar with premenstrual syndrome (PMS) which includes mood swings, headache, heaviness etc. just before having a period. Getting to know PMS, I searched for post-menstrual syndrome as well expecting to read something similar to my issue but surprisingly there was nothing related to post-menstrual things.  When I told my colleague about not finding it, I got to know that it was only me who was having those syndromes. All those years I was assuming that every woman experiences the thing I was experiencing. That afternoon, for the first time I searched for different reasons for vaginal burn. There, for the first time I read about polycystic ovary syndrome (or polycystic ovarian syndrome – PCOS).

PCOS  is a complex hormonal condition. ‘Polycystic’ literally translates as ‘many cysts’. This refers to the many partially formed follicles on the ovaries, which each contain an egg. The ovaries may develop numerous small collections of fluid (follicles) and fail to regularly release eggs leading to offer secondary side effects ranging from issues on regular menstrual cycle to prolonged diabetics and hormonal depression with suicidal thoughts.

Many of my symptoms including not being able to lose fat in certain regions of the body, having masculine physical character, irregular periods and vaginal pain matched with the symptoms of PCOS and I decided to visit a gynecologist as soon as possible.  My first ultrasound made my doubt come true.

Even though PCOS is considered a gynecological problem, it consists of 28 clinical symptoms. Women with PCOS produce higher-than-normal amounts of male hormones (androgens). The imbalance in one major hormone causes imbalance all over the body including imbalance in level of insulin leading to obesity and diabetes, imbalance in thyroid hormones leading to loss of hairs and the reduction on the level of dopamine (stress reducing hormone) could lead you to be drowned into periodic depressions. Besides this, hair loss and excessive hair growth, irregular periods, periods on long intervals, acne and easier weight gain or difficulty to lose weight are some other frequent symptoms.

This hormone imbalance causes women to skip menstrual periods and makes it harder for them to get pregnant. According to the data generated by Fertility Center Nepal, 40% of infertility and abortion in women are due to some effects of PCOS. It has been shown that out of 100 women at least three and up to 26 women would be a victim of this syndrome.

Researchers haven’t been able to determine what exactly causes severe symptoms of PCOS, but they suspect that it may be a combination of genes and environment. Also, it might be different for different people. Some doctors believe that high levels of male hormones prevent the ovaries from producing hormones and making eggs normally. Rise in the cases of PCOS nowadays has been assumed to be due to the lavish lifestyle we all are living although most cases come genetically.

PCOS do not have a fixed cure. Since this affects for a long time, doctors recommend some medications throughout your life and advice to never stay dehydrated, never gain weight or reduce it if you’ve gained, do regular physical exercises (including some specific exercises) and have a healthier diet. The body mass index should never shoot above 25. Some severe cases might get medicines to normalize hormones and to regulate periods. Women who want to get pregnant might have to go through some process of surgery and more medicines.

In my case, my major problem was periodic and unscheduled vaginal burn. I didn’t have obesity, extra growth of body hair or any dangerous mental problems. The doctor told me that my cause is genetic. After taking medicines for six months, my periods are now regular and not that hard as before, I still get a burning sensation but it is less frequent and isn’t like that before I started medication. My body looks more feminine nowadays. PCOS was responsible for many of my personal problems but I have finally come to be familiar with my own emotion and my own body. All kinds of emotions we get like being happy, being sad, being angry, being fearful etc. is the result of the activities of our hormones. Our emotional health contributes to our mental health. With primary cause being PCOS, you have a chance to get secondary problems of emotional and mental health issues and these secondary problems can lead you to tertiary problems.

It still might take another year or two to claim that I no longer have any gynecological problem. The change in me might not be just because of medicines but because of my efforts to eat healthy and exercise. I tried boosting estrogen (female hormone) level by taking an egg and drinking one glass of milk every day. Adding soy diet would be helpful if you are a vegan as these three foods are reported to induce your level of female hormones.

Many girls out there have problems with vaginal burn but of normal kind. Dehydration and use of gelled pad are the major cause for this problem and they can easily avoid this pain.

If you are among those who get this syndrome genetically, you might have already learned to deal with it. Never lose your hope to get a healthier body. There are cases where PCOS has disappeared completely by medication. For those who have got symptoms as mentioned above but are still medically undiagnosed, I recommend you to visit a doctor as soon as possible as the longer you wait, the more complicated your problem will get. For those who haven’t got any form of PCOS or gynecological problem yet, don’t take a single risk to get it. Exercise, stay hydrated all the time, always choose a healthier diet and most of all, although you would love eating paanipuri, chatpate and spicy pickles: stop eating all forms of spicy things. Why?

Here’s a simple explanation to this. Our body is a combination of chemical things. What we eat is also a combination of chemicals. Our hormones are chemicals as well. Spicy junk foods contain unhealthy chemicals which when inside our body, changes the normal level of our hormones and those hormones might change our whole body. If you don't believe this, try remembering how you get so energized after eating paanipuri and have pimples the next day.

I misunderstood many of my symptoms such as not being able to lose my belly fat, my masculine look and depressions as something else. Just a few days back, while having an online session on PCOS I got to know that the reason for my eyebrow and eyelash loss is also linked with hormonal disturbance which happened because of PCOs.

It’s not pleasant to know that your own hormones could lead you to something big like depression without other mental and social issues. It is not nice to know that you are born with something that will make many your days worse. Being a woman, we already have to deal with a lot of secondary problems. If we let our genital health come in between, our life would be more difficult. This is reason enough for every woman to be cautious about one's health. PCOS-like disorders aren’t something to take lightly. In this period of lockdown, when most of us out there are on course of gaining weight, I request you to go and search on how obesity affects your genital health. Maybe this will make you start exercising and sweating regularly. Exercise should not be done just to maintain your figure but also to have a healthy body.

Say no to any form of genital disorders.