Issuing a statement in the wee hours of Saturday, the President's Office announced the House has been dissolved asper Article 76(7) of the Constitution on recommendation of the Cabinet.

Article 76(7) of the Constitution states "If the Prime Minister appointed according to clause (5) fails to get the vote of confidence or if any member fails to be appointed as Prime Minister, the President shall, on the recommendation of Prime Minister, dissolve the House of Representatives and fix a date to conduct another election within six months."

The next election will be on November 12 and 19 as per recommendation of the Cabinet.

Calling an emergency Cabinet meeting just minutes after President Bidya Devi Bhandari said that none of Oli and Nepali Congress (NC) President Sher Bahadur Deuba can be appointed the next PM, Oli recommended President Bhandari to dissolve the House and hold the election in two stages on November 12 and 19. 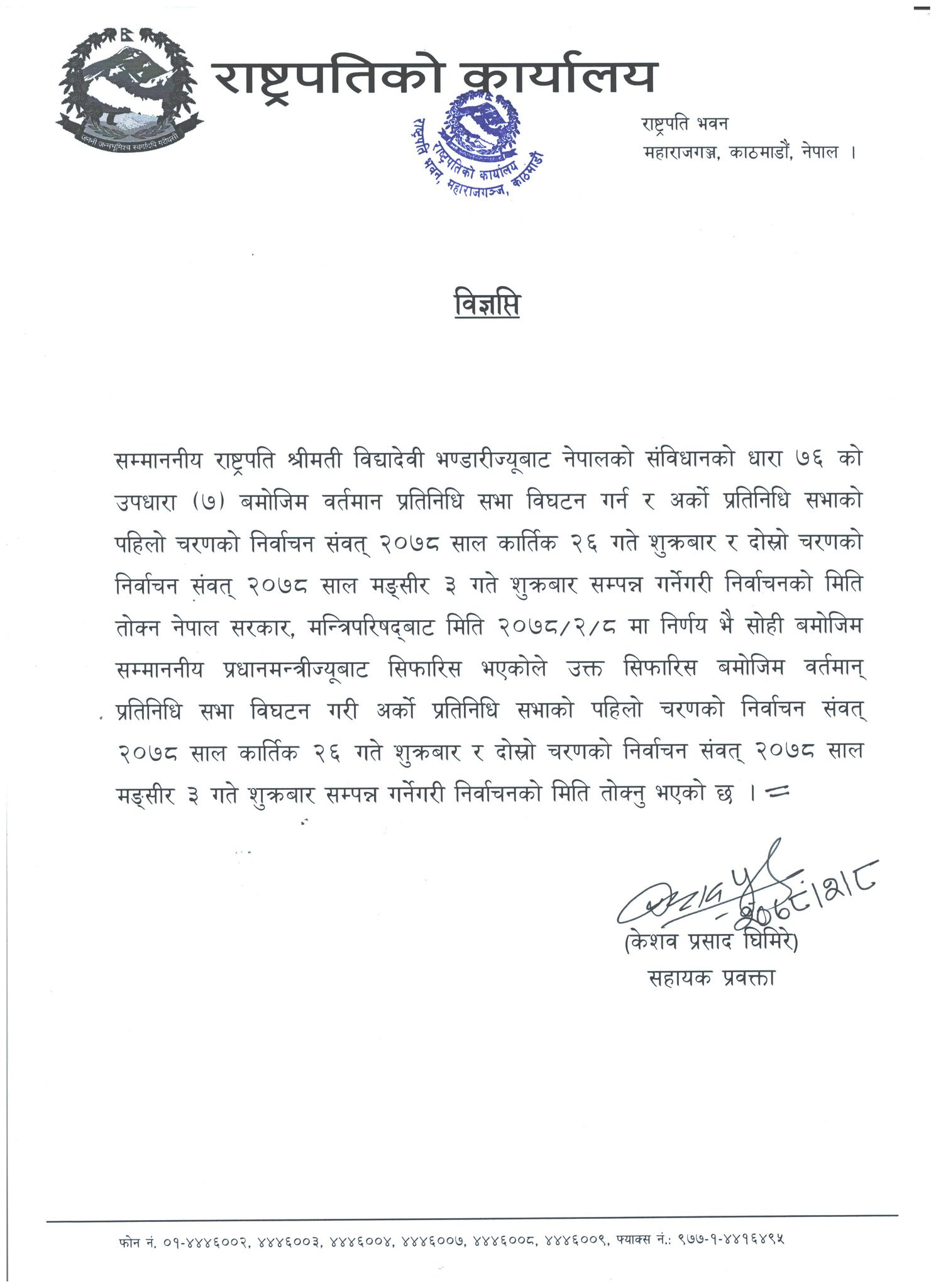 Oli had also dissolved the House on December as internal dispute in the then ruling CPN escalated but the Supreme Court (SC) on February 23 reinstated the House.

The five-strong constitutional bench led by Chief Justice (CJ) Cholendra Shumsher Rana on had unanimously ordered House reinstatement after two months of hearing. It had also issued a mandamus ordering that the House session be convened within 13 days.

The Cabinet's recommendation in the midnight came after the President's Office pointed that both Oli and Deuba's claims do not seem justified minutes earlier.

President Bhandari reasoned that Oli cannot be appointed PM as 26 lawmakers of CPN-UML and 12 of Janata Samajwadi Party (JSP) that he included in his claim to contend that he has support of 153 House of Representatives (HoR) members have signed in supported of Deuba.

President Bhandari earlier said she will consult constitutional experts after Prime Minister (PM) KP Sharma Oli and Nepali Congress (NC) President Sher Bahadur Deuba both staked claim for new government claiming that they have support of majority in the House of Representatives (HoR).

Oli staked claim first claiming that he has support of 153 HoR members including 121 CPN-UML lawmakers and 32 of Janata Samajwadi Party (JSP) just a day after telling President Bhandari to go for formation of new government in accordance to Article 76(5) of the Constitution pointing he does not have numbers to pass the floor test.

Oli had repeated that he did not opt for floor test as he does not have majority during his press conference with editors of media outlets that was broadcast live across the country less than a couple of hours before staking claim with President Bhandari saying he has support of 153 lawmakers.

NC President Deuba then reached the Shital Niwas with list of 149 lawmakers including 26 lawmakers from the Khanal-Nepal faction of UML, 12 of the Yadav-Bhattarai faction of JSP and one from rashtriya Janamorcha. UML lawmaker Madhav Kumar Nepal, and JSP lawmakers Upendra Yadav and Baburam Bhattarai and others who Oli claimed support him were present in person when Deuba submitted his claim.

The opposition leaders left the Shital Niwas at five in the afternoon after the deadline given by President Bhandari for formation of the new government as per Article 76(5) of the Constitution expired.

"President has said she will look at this and take a decision after consulting constitutional experts," Chairman of the federal council of JSP Bhattarai told Setopati. "There is no room for any ifs and buts as we have clear majority in the claim we submitted in accordance to 76(5)."

He argued that President Bhandari has no room for fraud in the matter as the 149 lawmakers have individually signed on the claim.

He added that the person staking claim as per 76(5) should submit signatures to prove majority.

NC General Secretary Purna Bahadur Khadka also confirmed that President Bhandari said she will consult constitutional experts. He said the opposition parties told President Bhandari that Deuba should be appointed PM as they have submitted signatures of majority lawmakers.

CPN (Maoist Center) Chairman Pushpa Kamal Dahal told President Bhandari to simply implement the claim of opposition parties who submitted signatures of majority of lawmakers. "Let this not be guided toward complexities. Let the politics get simple outlet," a leader quoted Dahal as telling President Bhandari.

UML leader Nepal also told President Bhandari that the country will face uneasy situation if the politics were guided toward complexities without implementing the claim supported by signatures of majority of lawmakers.

The signatories include 276 lawmakers from the Khanal-Nepal faction of UML and 12 of the Yadav-Bhattarai faction of JSP.

The current strength of HoR is 271 after Maoist Center expelled four lawmakers who joined CPN-UML after the Supreme Court (SC) invalidated unification of UML and Maoist Center on March 7.

UML currently has 121 lawmakers including those of the Khanal-Nepal faction, NC 63 (but two are suspended), Maoist Center has 49 (including Speaker), JSP 34 (including two suspended) and three lawmakers are independent.

The parties had to muster support of 136 lawmakers for majority.