The Chhau Goth inside our minds 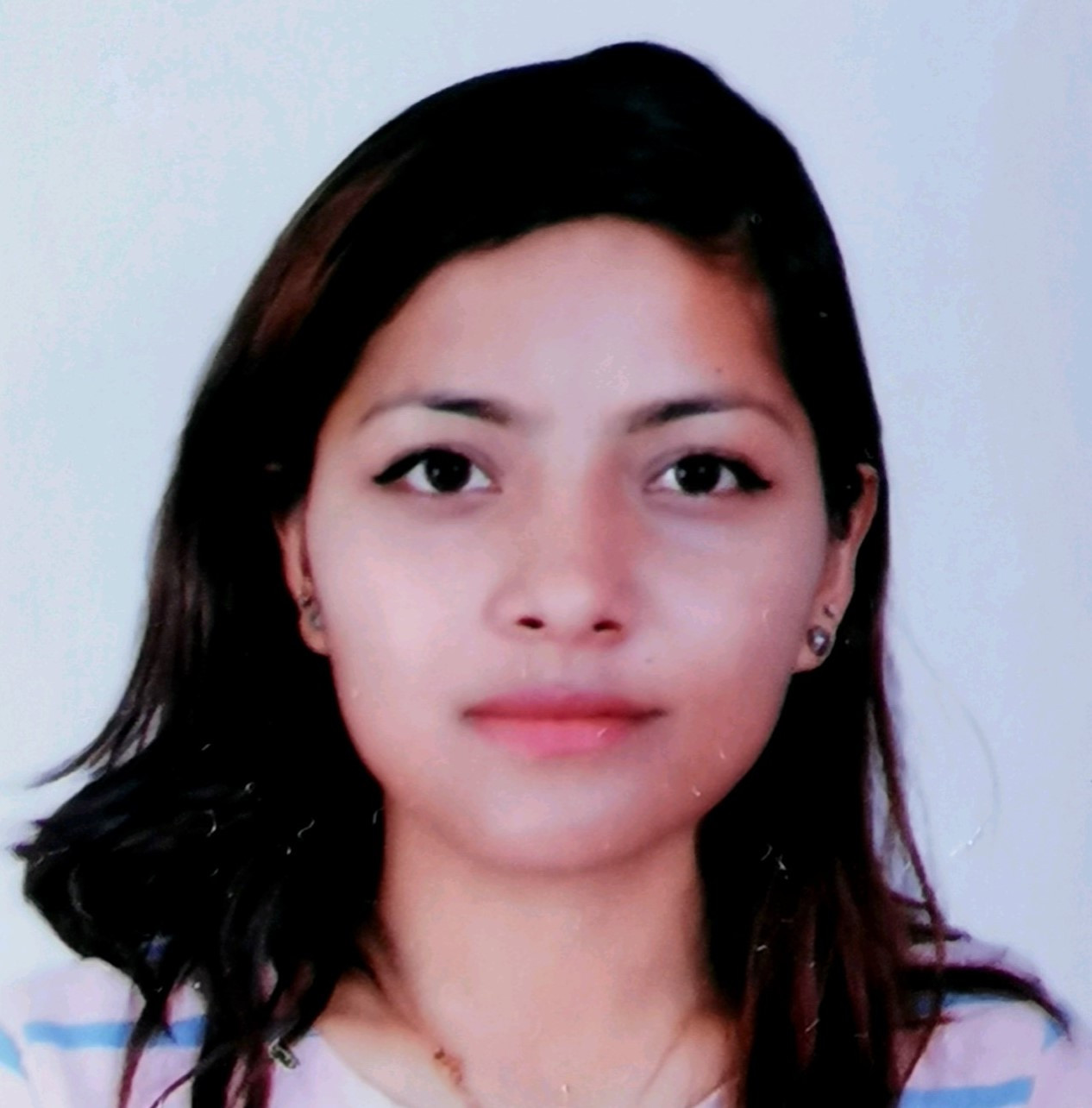 “Tomorrow I am leaving for the far west for a field work on menstruation and today I get my period.  What a weird coincidence?”

I am immediately reminded of my privilege of not having to go to an abandoned hut straight away.

The self-talk was running on my mind just before I went on to my second field work of 2020, the COVID year. My previous field work was in Sarlahi and Janakpur as part of food relief distribution.

It’s been a few years that I have been working for social concerns and I love visiting different communities and meeting the people there but even now field visits give me excitement and anxiety at the same time. Field visits have been an eye opener for me. On many occasions I have been confronted with my own unconscious biases, putting me through many uncomfortable emotions that ultimately help me grow as a person. I always bury some biases and pre-assumptions that I carried about social issues, there on the field.

This field was really important to me as I was going to Accham. I believe I may not be the only person whose brain is wired to think about “Chhaupadi” and “Rara Lake” when we hear Far West.

We were informed that we were not staying in a hotel due to COVID-19 situation and we were about to stay at someone’s house there. The first thing that hit me was how were we going to manage our period and where were we going to dispose of our pads? And if we told the house owner that we were on our periods, were they going to put us in a “Chhau Goth”. What would that be like? All those stories and news of how the girls and women there stayed in a small Chhau hut during their menstruation and all those difficulties they faced and the incidents of abuse, violence and death that occurred inside Chhau hut started to play inside our heads.

“Are we really confident in pursuing this project after all?”

The “we” here is me and my friend Shreya. My trip partner. 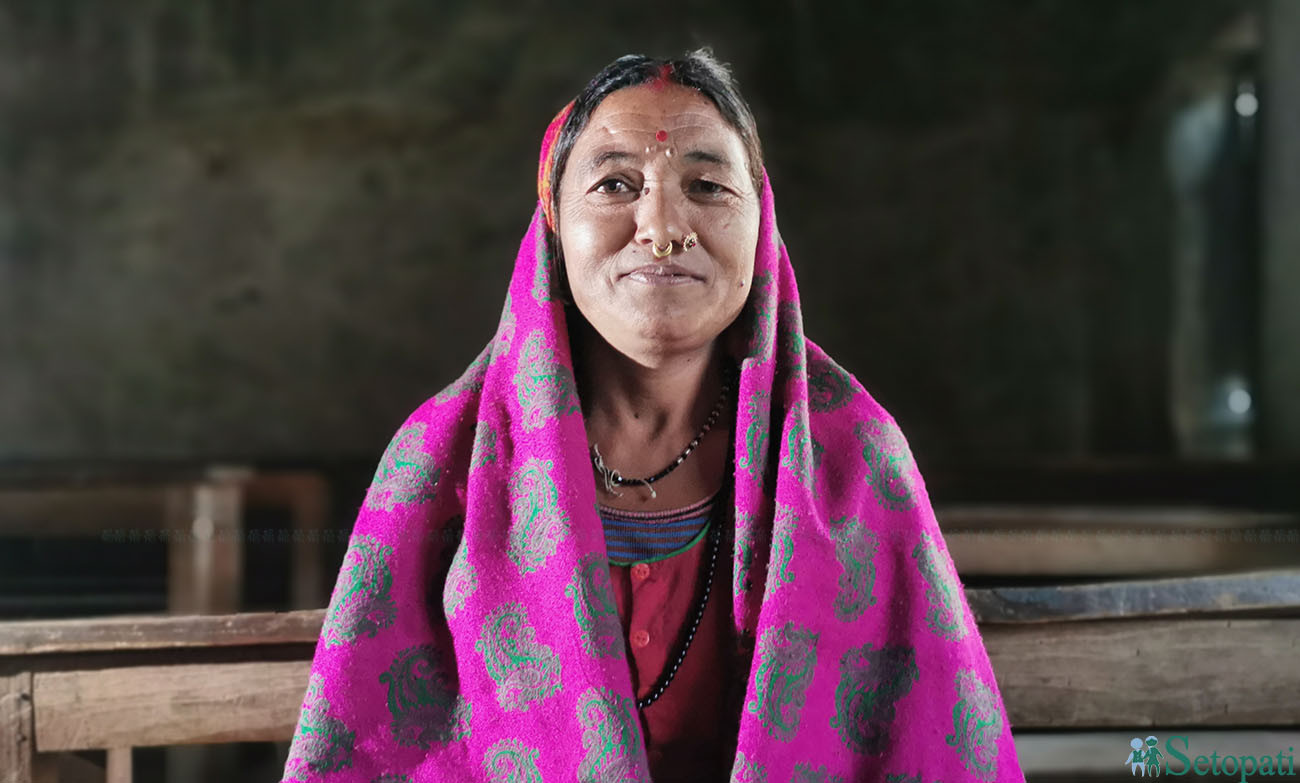 Luckily, we got to stay in a hotel at Sanfebagar, Accham. The COVID threat was slowly dropping down and few hotels were taking guests. We got a nice room for us and no there were no "Chhau Goth" around Sanfebagar. It was a long day and we were exhausted. We had our morning tea at Kathmandu, lunch at Dhangadi and dinner at Accham, the same day. The road trip from Dhangadi to Accham was comfortable and a treat to the soul that continuously strives to be closer to nature. Throughout the trip I was in a state of serenity pointing toward everything  I found fascinating as if I were a baby. The scenic view of the haystacks all over the lands in Doti, the deep blue rivers, the green farms and everything present at that moment served me as a happy pill. After a period of lockdown inside the house due to COVID, just being there in the presence of nature and good people felt more than special.

The next morning, we went to Sakot, with some local activists. We were going there to conduct a program about “Dignified menstruation and the effect on mental health due to factors related to menstruation.” I was allocated to the resource section of mental health. The road was risky and we were an hour late at reaching the school. A group of young girls and women were waiting for us there already and they greeted us with a big but shy smile on their faces.

The program started and all I was expecting from them was to share about the menstrual taboos they followed and believed, and how they are helplessly giving in to all those menstrual stigmas because we went there all over from Kathmandu to break those taboos and stigmas, didn’t we? But, to my surprise most of the participants shared their stories of how they lied about their periods at home and stayed inside the house instead of Chhau hut to test whether the taboos are real. To test whether or not god punishes them for breaking the taboos.

Boooom, this was the first attack on my pre-assumptions about the Far West.

I was totally excited to listen to these stories of brave women, young and old, who spoke with their beautiful Acchami accent about how they were fighting the norms of their society and the anger and determination to root out the stigma that was prevalent in their community was radiating through their eyes and their voices. The credit was all to the local activists who worked to break that Chhau hut in their minds unlike the policy makers who are trying to decrease this problem by decreasing the number of physical Chhau goth. These activists have worked to empower these women to advocate what they learned and to fight to gain a position that they deserved at home and in society regardless of whether or not they are on their periods. 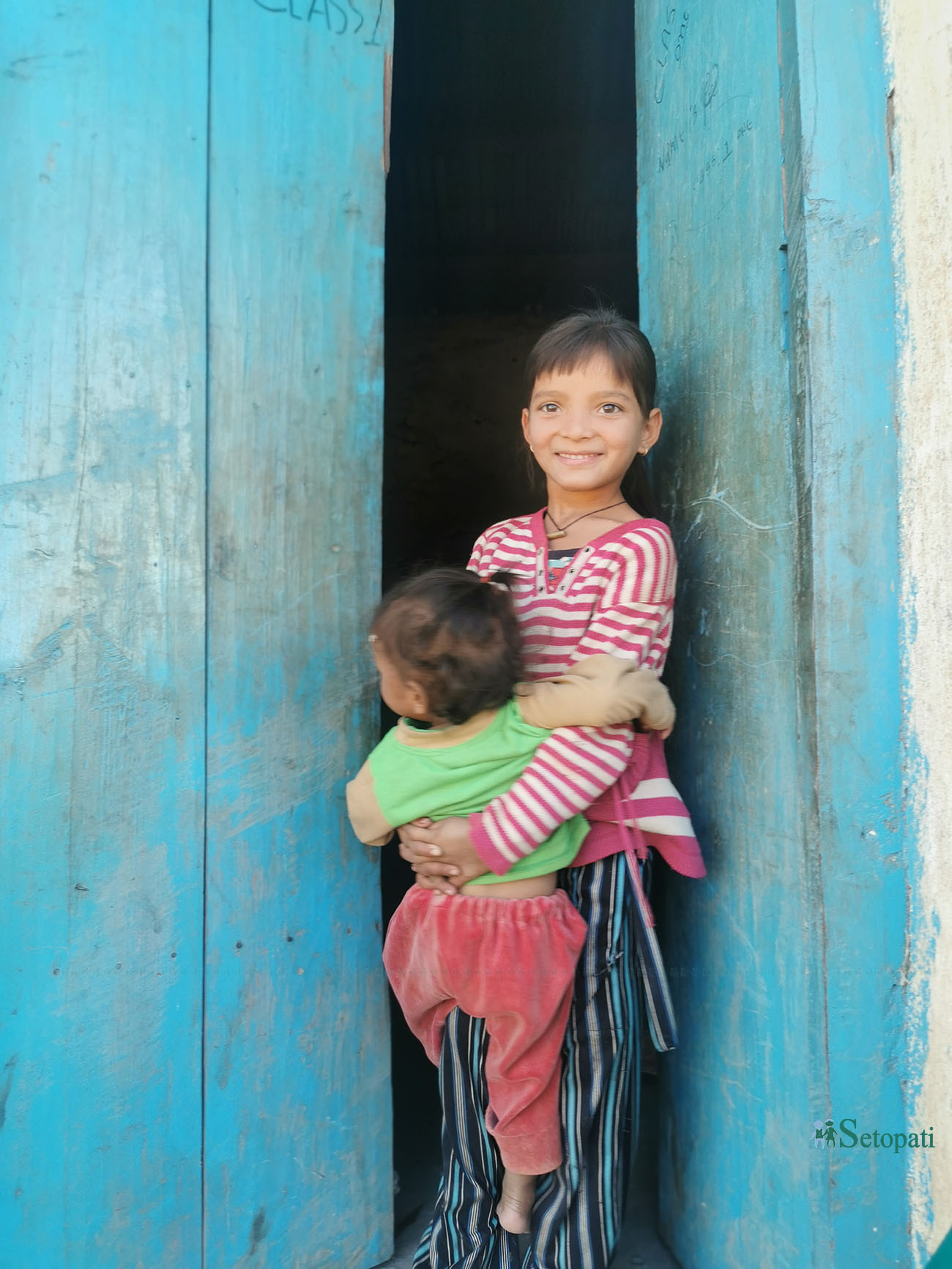 The thing that generated passion to work on this issue for me was not the fact that the society forces people to follow “Chhaupadi” in the name of culture but to know more about what makes all of us accept such degrading culture. When do we actually start believing that menstruation actually makes anyone impure? At what age? At which moment we decide to never experiment and explore the truth and accept all the ill treatment we receive based on the biological process?

We heard their stories about how they had to do all the outdoor chores while they were menstruating but were given dry bread for meals and restricted to eat most of the foods and are not allowed to drink milk.

Rupa Saud, 26, shared, “My in-laws think I am being over-smart by not staying in the Chhau hut. Back at my home in Surkhet I never had to follow Chhaupadi and nothing ever happened before. What’s the point of keeping our gods alive if we ourselves are going to die in a Chhau hut?”

Seema Kumari, 20 shared, "The women here think we are gaining some personal benefits for advocating about this issue. Some of the women here don't wear any kind of pads. We offered to teach them pad-making skills using clothes available at home but they refused and said they will not use any such thing as they have never used anything to manage their periods before and just because you young people went to school doesn’t mean you know everything.”

Now, this was the second attack on my pre-assumption. My preconceived notions were challenged one after another and defeated bravely by the girls. I used to think people there were not being able to manage their periods properly and hygienically because they didn't have access to the materials. I used to think that if we would give them access to materials and skills, half the problem about menstrual hygiene would be solved. But, turns out it's just what I “think”. 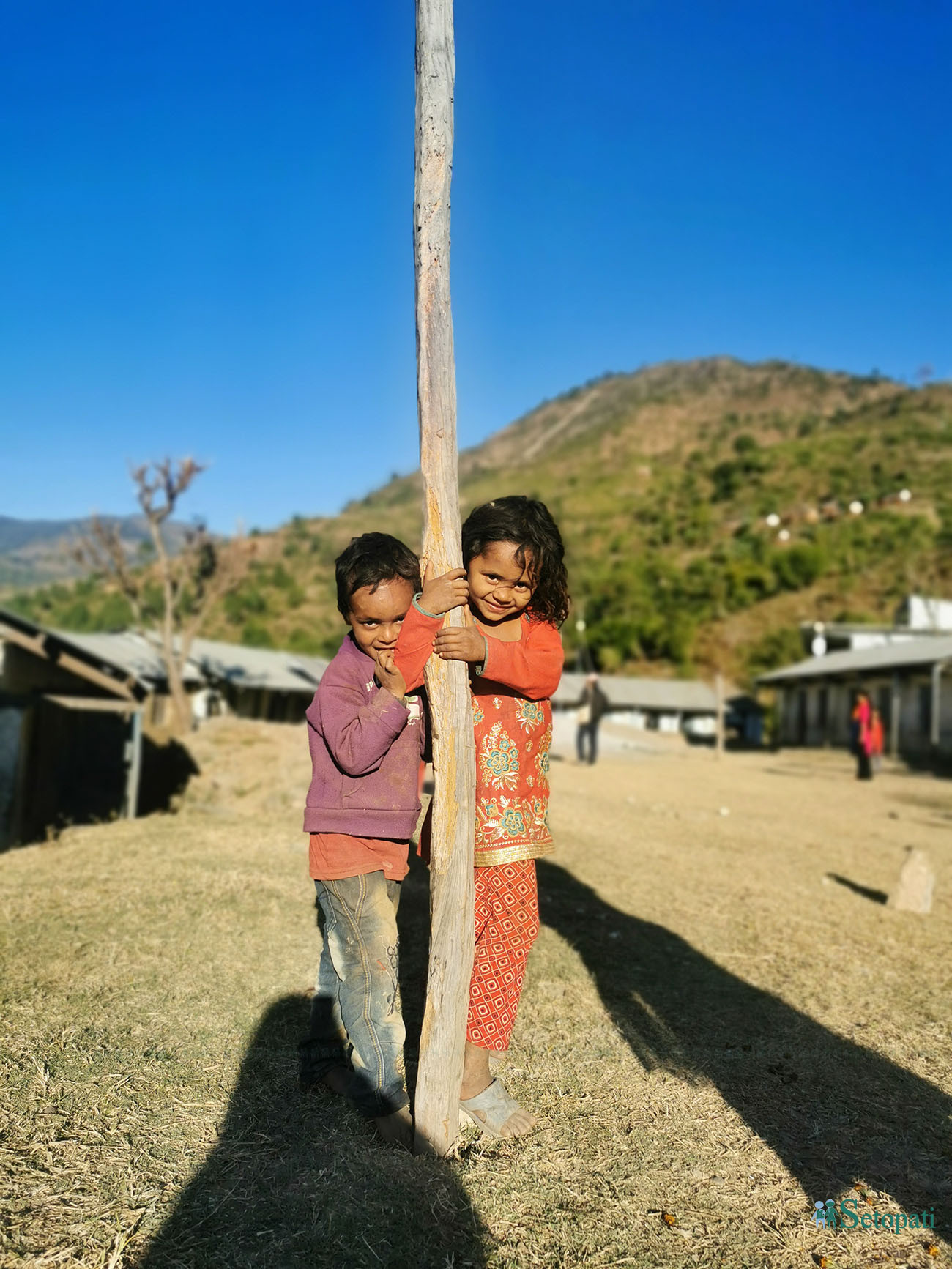 As Socrates puts it, “I cannot teach anybody anything, I can only make them think.” After listening to these women and girls I felt that they have really started thinking and this thought has led them to take action to test those cultural norms. The reason I ended up there was also because I thought about these issues, I had few unanswered questions I was seeking answers for.

Lack of resources, information and skills are not the only problems. The mindset established against menstruation is a real problem. Who seeded such a strong fallacy of untouchability toward women on those days of the month? And how did such taboo spread so contagiously among all races, all geographies, and all levels of the people? It is one of many stirring unanswered questions that has been holding the women communities back in many parts of the world. But the positive part is, these questions have started to arise among some people and as long as there are people working to ignite such thoughts more and more, every single person can win and help others win the fight against such taboos on their own.

Now, my mind is no more wired to think about Chhaupadi when I hear Far West. All I now think is how many of us are carrying a Chhau goth inside our mind, wherever we go? How do we plan to take ourselves out of that small, narrow and dark Chhau goth?

(The author is executive head at SiTL, an NGO working for youths and children)