Memoirs of the 'Super-Spreader' 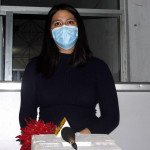 Lam and I were at the Hamad International Airport in Doha on March 17. It was our last exchange before Lam would catch his flight at 2:30 am or so to Ho Chi Minh in Vietnam and I would go back home to Kathmandu. We’d blamed coronavirus for the situation we were in, for the emotional rollercoaster that we’d experienced—not knowing the ride really hadn’t even begun. While we were in quarantine, Lam tested positive for COVID-19. This was a big reality check for both of us and many of our friends. Something we had only seen in memes and farewell letters had snuck its way into our reality. Two days later I too tested positive for COVID-19.

Nepal only had one case of coronavirus prior to mine which was of a student who had already recovered. Therefore on paper, my country maintained a 100% recovery rate. Due to this, many citizens took pride in the fact that Nepal did not have any other cases. Many beliefs went around on why we had been spared by COVID-19, reinforcing a form of national pride rooted in conspiracies. Under these circumstances, I was the second ever and the only active case in Nepal. My case, therefore, had no previous protocol to follow and not many knew how to approach my situation.

My family was notified of my test report at 10:00 pm. Despite my sister repeatedly telling me that I had tested positive I refused to believe it. I had shown no symptoms until that day. Retrospectively thinking, between the time I got tested and the report was released, I had convinced myself that I had been over-thinking. I had found some comfort in denying that I had the virus and denying the possibility that I may have infected anyone with it. The thought that I may have infected people on the way or my own family remained my biggest concern after coming to terms with my situation for the rest of the days that followed. After all, the doctor had specified that I had a large virus count, which meant I was extremely contagious at that point. Amidst my thoughts of concern and anxiety, an ambulance was headed toward my house to pick me up immediately to place me into the isolation ward at the Teku Hospital.

The symptoms started on the very first night at the hospital, where I was admitted on the 22nd of March. I had massive stomach pains and the accompanying shortness of breath meant I was not able to sleep the whole night. You know how when you pay attention to your breathing and it starts feeling more and more abnormal every time you inhale? It was like that for several days. My chest forbade me from taking deep breaths. I no longer was control of my body and the virus was.

Getting out of the bed had to be done with effort, eating had to be done by force and insomnia prevailed. I distinctly remember a night when after reading about lack of smell being a COVID-19 symptom, I tried to smell a bar of soap. Surprise, surprise I couldn’t! Talking about symptoms. I also had minor dry cough, while I did not have a fever at any time. Nonetheless, it is important to note that my case was mild. My heart goes out to those who have had to experience this virus, many who have had it much worse than me.

Throughout all of this, the media played a big role in my circumstances. I knew I would have to bear the consequences of everyone coming to know that “a 19-year-old girl, a student who had travelled from France via Doha on the 17th of March” had tested positive.

Kathmandu is a small city. To those who knew me, these details automatically struck my name. Although the media kept my name anonymous -and I’m not exaggerating when I say this—almost every outlet I knew, had quickly written an article about me with the above-mentioned details and many more. Some that were true, but many outright false. Lam had become my female roommate in Paris. I had apparently met with many relatives before I got tested. My parents were made into doctors. A particularly striking article was the following: Republica, an English daily that publishes The New York Times in Nepal, had labeled me a ‘super-spreader’ out of speculation. They didn’t know my story, they didn’t have any evidence of me spreading the virus. But to many people, that was who I had become—a SUPER-SPREADER.

The 23rd of March was something else. Somehow, somewhere, someone else had decided the narrative to my story. They had changed up my facts to fit theirs. I became subject and subjected to the stigmatization that surrounded coronavirus in my country. Social media was exploding. People were blaming me, people hated me, and many even went as far as to give me death threats, suggesting that they rather have me shot dead than alive.

The negative comments got to a point where my doctors would often call requesting me not to check the news. I had proof of my self-quarantine and I had proof of how careful I had been, yet I did not have a voice. My anonymity was necessary to assure my physical safety. Even amongst my own social media circles, I saw many who posted about my case (not knowing the patient was me), oftentimes with negative connotations. Stories with facepalms and sighs! Nevertheless, I understand that they may have been misinformed and did not have the intention to hurt the patient, to hurt me.

That day, the Health Ministry went on to call a press conference specifically to discuss my case followed by a lockdown. I sat on my bed wondering how I had gone from self-quarantining in my room to causing my entire nation to go into lockdown. Yes, I was in many ways responsible for my government's decision to go into a nationwide lockdown. At that moment I wish I had reminded myself that it could have been anyone else in my shoes. But the reality still was that it had been me. It was overwhelming and this story was one for the books.

Amongst all the chaos, I was, am and will always be extremely grateful to my nurses for keeping my spirits up. On the 24th of March, the nurse on duty had called me simply to say she wanted to convey the message that one of her Facebook friends was praying for me along with their entire village. Upon knowing that the nurse worked in the hospital where I was admitted, the man had requested her to let me know of this. These little gestures massively raised my spirits throughout for the next three weeks. The nurses called me every now and then until the end to simply check up on how I was, even during times when it wasn’t necessary. My doctors too have shown immense kindness toward me, constantly ensuring me that everything will be ok.

If you have made it thus far thank you for making an effort into understanding my situation from my perspective today. I have recovered from all of my symptoms and after a month of landing in Nepal, have finally tested negative. The majority of the people who were on my flight have been contact-traced and none were found to be infected by me. Everyone in my household also tested negative to the virus, due to the cautious decision to self-quarantine. Lam too has fully recovered and is in good health.

I am aware that many things have been left unsaid in this article: whether the hospital had adequate preparations, what communications between me and my doctors look like, or what kinds of medicines were provided to me. Neither have I talked about the measures I took in self-quarantine and my recovery process. However, I am always free to talk about any of these things and may write about many of these aspects in the future.

Finally, today my mental and physical health remains intact, due to support from my family, my doctors, my nurses and my friends. To those who have been aware of my situation and continuously supported me, I am largely grateful to you and everything you have done for me in the past three weeks.

One thing I have grown to realize in this process is that oftentimes we disregard the mental health part of the virus. Symptoms like shortness of breath can largely exacerbate one’s anxiety as well as the ignorance the public may show toward them. COVID-19 is not something to stigmatize and could happen to anyone and at any given point of time. This is something we all have to understand. To anyone else who may find themselves in a similar situation to mine, I remain at their disposal should they wish to talk about it or have any questions and I wish them a speedy recovery.

Rabindra Mishra’s wrongheaded agendas
The good, the bad and the society
Wastewater surveillance for investigation of diseases
Human-elephant conflict around Bardia National Park
Bureaucracy also to blame for sorry state of health sector
Violence against healthcare workers affects your health!